Learn about our team’s most exciting stories, projects, events, and more! 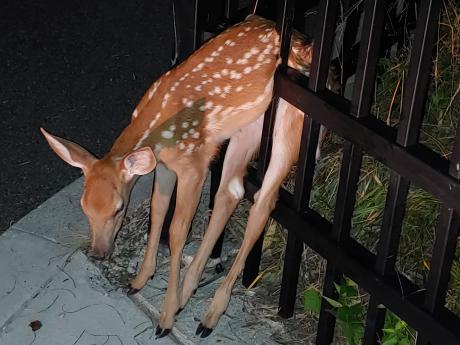 It’s rare that Officers at the Zoo have to worry about animals trying to get in.

As Police Officer Dale Anderson and Sgt. Christopher Carter walked their patrol route at the National Zoo in the pre-dawn hours of July 9, everything seemed quiet and routine—until suddenly, it wasn’t. Trapped between the steel bars of the fence near the entrance to the Hay Barn and the Loading Dock was a tiny, terrified fawn.

There were no animal keepers on-site at 4:49 a.m., so it was up to Anderson and Carter to free the little critter. Sgt. Carter unlocked the gate so they could reach the tangled fawn, but he’s a city kid from Baltimore, so it was up to Officer Anderson, who has experience with farm animals, to figure out how to free the fawn. It was a little awkward because of the way the little deer had trapped itself, but Anderson was able to gently lift the fawn and free it.

“I’ve never before had to assist baby deer,” Sgt. Carter said. “I was relieved that we were able to give it aid.”

As soon as it was freed, the uninjured fawn immediately curled up in the grass and lay still, as little fawns are taught to do by their mothers.

The officers left the fawn for its doe to find. Mom may have a few words to say about adventurous youngsters who wander off into trouble. 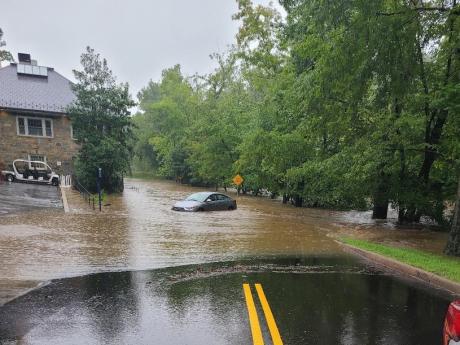 On September 10, 2020, the National Weather Service issued an emergency flash flood watch. Rain poured down and quickly caused the nearby Rock Creek to overflow and dangerously fill the roadway.

OPS Officer Patrick Bero noticed a person was stuck inside a vehicle that was becoming submerged. He quickly radioed for assistance. Sgt. Jeffrey Matthews arrived on scene in the police’s Polaris, picked up Officer Bero, and together they made their way to the flooded vehicle, which was stuck in water that almost surpassed the door handles. Officer Bero assisted the driver of the vehicle through the passenger side window and onto the bed of the Polaris. After the driver was removed, the vehicle floated sideways on the roadway with the back of the car facing the flood-swollen Rock Creek. Fortunately, the OPS officers successfully rescued the driver from the dangerous situation, and delivered them unharmed onto dry land.

NZP officers made this rescue possible by working together to keep staff and visitors safe during a flash flood emergency.